skip to main | skip to sidebar

M, an acquaintance from high school recently posted a query on Facebook the other day about political discussions using that platform. He had been "unfriended" by someone who disagreed with his politics. This person had posted that she agreed with President Carter that much of the antics we are currently seeing on the right and even in the Republican party are motivated by race. M apparently disagreed via online comment and was then summarily released from Facebook friendship. His question is: can you only comment on other people's political posts if you agree with them?

Perhaps Facebook is not the best place to discuss politics. In my few months of use I have noticed that interactions there tend to be more civil than anonymous Interweb back and forth. But when it becomes uncivil it can become personal and damaging to real relationships with "real" people. (Not that real relationships can't develop on the web, but I tend to assign much higher value to those that are with people we have at one time interacted with in the flesh and blood world.)

Now I don't know exactly how the interaction that resulted in the unfriending went, but I have to say that in the current amped up climate I am not surprised that it would lead some folks to cutting others out of their social networking circles. And to be honest it is not just the current political climate but one of simple online sanity. I have hidden the updates of one particular "frienemy" whose constant uninformed anti-Obama posts I find galling. So I just don't subject myself to them anymore. Problem solved.

But I do want to address the toxic political climate and the question of racism on the fringe right wing of American discourse. First of all, I don't personally think that all or most of the criticism of Obama is rooted in racism. I haven't heard anyone suggest that all such criticism is so inspired; that is a straw man set up by the right. But can anyone deny that racism does play a part in all the nuttiness we are currently seeing from the likes of Glen Beck, Drudge, Rush Limbaugh, and some of the 9-12 protesters carrying signs of our president dressed as an African witch doctor?

I read John Bohrer's column on Huffington Post yesterday that says it very well. The nut jobs would have been coming up with wild ass conspiracies regardless of which Democrat took the White House. But Obama's race is icing on the cake. Here's the kicker: "People like that have always been around. They will always be around. What's different is that a political party has never adopted them before." That's the scary part. Some of these nuts are advocating secession and violence against the government. And they are being courted by the Republican party.

I am personally concerned that we may see another Oklahoma City. I am almost certain that we will see more wingnut-inspired violence like that which occurred at the Holocaust Museum. That these people are being encouraged by the right wing media echo chamber and even some elected officials is especially concerning, as it grants them legitimacy and broadens their reach. The mainstream used to mostly ignore these folks. The GOP seems to be less and less mainstream by the day. And all the nuttiness has drowned out legitimate criticism. To say the least, this is not good for the republic.

Venting: this is not how we are supposed to do things in the United States of America! Obama and the Democratic Congress are doing no more than exactly what they campaigned on and were elected to do by the American people. If you don't like it, get someone else elected and change it. In the meantime make your views known peacefully. But don't carry your guns to town hall meetings and poison the political discourse with ridiculous made up charges involving birth certificates and death panels. Because when you do that we can't have a conversation at all.

I put a lion's share of the blame on the right wing media. Fox News and talk radio allow the right to live in their own universe with their own facts where our president is a racist and an evil clown secret Kenyan Muslim socialist bent on taking away our freedom, indoctrinating our children, and killing our grandmothers. I know some of my family receives their information from these sources and I am angry at these folks for filling their heads with this craziness. No wonder we're unfriending each other. We're not even on the same planet.

Edit: I hope it is obvious that I do not mean to imply that all listeners to right wing media are prone to violence. I think it is a small percentage but we are creating an environment where violent extremists can draw succor from and be encouraged by the bloviating, fear-mongering, race-baiting, and conspiratorial nature of what passes for punditry on the far right.
Posted by Brian at 5:42 PM No comments:

FV is thrilled that we have a very good chance of getting health care reform this year. I am interested that President Obama has now said he is open to requiring individuals to purchase health insurance unless they can't afford it. It kind of begs the question, don't those folks need insurance too? Perhaps they would be covered by Medicaid.

Here's a different idea, though. Instead of requiring people to purchase insurance, why don't we just create a fair tax system such as a value added tax and then just cover everyone? It sounds so simple. But, alas, so European, that we would never do it.
Posted by Brian at 8:25 PM No comments:

Oh, "Challenge to Tradition" must be the new euphemism for subverting due process.

FV was obviously a big supporter of candidate Obama, who never proposed anything like "preventive detention," being that he was a constitutional law professor and everything. And I can't sit here at my keyboard and tell you what I would do if I saw these detainees dossiers. But I do think our country is strong enough to uphold due process even for suspected terrorists.

As I understand it, no Western democracy, even those with much more experience with terrorism than ours, allows for indefinite detention without charges or trial. This has gone on long enough. Just because you "create a legal framework" for something doesn't make it Constitutional. Or right.

What are we becoming? Is this the country our fathers and mothers fought and died for?
Posted by Brian at 10:28 AM No comments:

I don't know the legal definition of treason, but perhaps torturing prisoners in order to extract false confessions to justify an invasion might fall somewhere in there...

Mr. Holder, appoint a special prosecutor to investigate the torture regime. It's not looking backwards; it is called upholding the rule of law. And in our democracy nobody is above the law. Or are they?
Posted by Brian at 10:13 AM No comments:

Bless us and bless our new president

Since I'm updating the blog so sporadically these days, this is going to look strange coming right after my election night post but here goes.

I've been trying to figure out how much slack to cut President-elect Obama in his choice to have Rev. Rick Warren deliver the invocation at the inauguration. At first blush it seems to me a massive slap in the face to the GLBT folk (and their friends and family) who helped to elect him.

Yes, it is merely symbolic. It is not policy related. And maybe I can cut him some slack on this.

Then I read Warren's comments equating homosexuality with incest and pedophilia, and I read that until recently he had a message on his church's web site that an "unrepentant" homosexual could not be a member of his church.

And I think - couldn't we have found someone else?

The GLBT community is accustomed to being thrown under the bus at the first sign of friction, but it is almost as if the incoming administration is going out of their way to slight them with this decision. Make no mistake about it, Obama has been consistently against marriage rights for homosexuals, so perhaps we shouldn't be too surprised. But Warren has become a lightening rod to advocates of gay rights because of his disturbing statements linked above and because of his strong support for California Proposition 8.

To invite Rick Warren to deliver the invocation at the inaugural is not to encourage unity with religious conservatives - they are upset that he accepted the invitation. No, to invite Rick Warren is to say to gays and lesbians and their families, at the outset of this administration we're putting politics above civil rights and equality and there will be a powerful reminder on an otherwise joyous day that there are still second class citizens in this country.
Posted by Brian at 7:56 PM No comments: 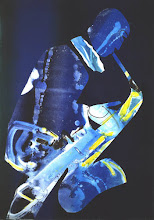 Brian
I started this blog as an outlet to "spout off" on items of interest to me. I have been accused of using too many commas. Welcome to my corner of the Interwebs.